My friend Rose sent me a bag of somewhat over the hill pistachio nuts in the shell for the tiny Douglas squirrel whose name, I have intuited, is Rufus.  I put a dozen of them out in a bowl on the porch in the early morning and a cup of sunflower seeds nearby on a plate.

Now that Rufus is here daily, Zoe the cat spends all her day watching him through the french doors.  I know he's shown up for work when her tail starts to twitch.  And when I went to look, there was Rufus sitting next to the bowl of sunflower seeds, eating happily away, whereas the pistachio nuts were being exported under her eyes by two large black squirrels to their places in the back yard.  To each his own.

Maybe the pistachios were too big for Rufus?  Except that he does keep fir cones in with his collection of sunflower seeds kept in Ed's shoe.  But we've had two days when he didn't give the pistachios a glance, so I have to conclude, I think, that they are not to his taste.  Zoe, after all, does not like poached chicken breast but will happily eat roast chicken breast.

I hate to discover that non-human animals are as hard to figure out as people.  Especially now that I am in my declining years.  Some ideas ought to be sacred.
Posted by judy ross at 10:35 PM No comments: Links to this post

Some News from Library Fundraising 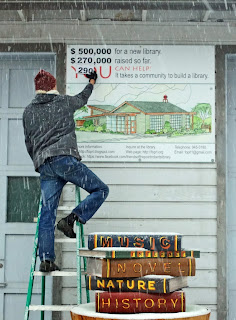 This was taken a couple of days ago, but it's even more now.  The snow, by contrast, is even less....  (Cross-posted from foprl@blogspot.com, the library fundraising blog.)

Posted by judy ross at 8:05 PM No comments: Links to this post

And the Winner of the PREP Quilt

is Sandy Fraser who works at Sterling Bank!  Congratulations to Sandy.
Posted by judy ross at 1:44 PM No comments: Links to this post

But if you want one, I was at Brewsters yesterday (parking lot filled, happily) and they are selling them up front near the cash register.  So you can still get one or more.  Good work, Fire Guys!

I sent one to my New Mexico daughter, who had followed the fire hydrant saga on the blog and on the APB e-edition.  She received it today and wrote me: "Best calendar evah!"  That seems about right.
Posted by judy ross at 4:20 PM No comments: Links to this post

update below.  Yesterday, I put about a cup of sunflower seeds on the porch for the benefit of the birds and whomever.  Who first showed up was a tiny Douglas Squirrel who simply spent the entire day racing back and forth across the porch, moving the sunflower seeds, one at a time, into a bucket of sawdust that also happened to be sitting on the porch.  By the end of the day, he had moved them all (with a few held out for nourishment).  And this morning, with a new cupful of seeds produced by me, he is back to hiding these on the porch underneath a table in a small bag.

I am not sure I have ever seen such continuous industry.  We can't even get a photo of him because he is moving so fast.  And oblivious to our presence.  However, Zoe the cat spends all day long watching him through the french doors that lead to the porch.  Her tail twitching and twitching.  By the end of the day, she is about as tired as the squirrel is, I'm guessing.  Fortunately, she has us and doesn't have to worry about a future supply of food.  Sort of true of the squirrel, too, but he doesn't know it.

update: he got the sawdust bucket filled up with seeds and, the next morning, moved on to filling one of ed's shoes with the next batch of seeds.  He's indefatigable, and it must be especially stressful when you're a 6-12 ounce squirrel being supervised by a 14 pound cat....
Posted by judy ross at 10:58 AM No comments: Links to this post

Good blog post on the mysterious illness of sea stars all up and down the west coast.  Read the comments, too.  There was a comment here recently from someone who dives off Point Roberts and he said that he had been seeing lots of ok sea stars in our vicinity.

http://westseattleblog.com/2013/12/followup-sea-stars-starfish-still-dying-still-mysteriously/
Posted by judy ross at 7:58 PM No comments: Links to this post

Video of Tower Demonstrations in B.C.

Deals only with Tsawwassen demonstration, but one P.R. resident is interviewed.

http://globalnews.ca/video/1002068/tsawwassen-radio-tower-protest  (Dec. 1 newscast, about 8 minutes in).
Posted by judy ross at 6:11 PM No comments: Links to this post 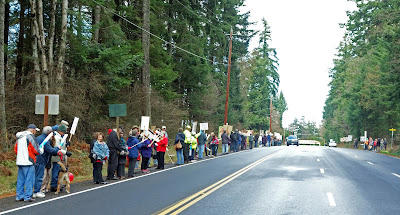 Updated, below.  And now a second update.

The weather smiled upon those organizing the Radio Towers Opposition today.  Yesterday at noon, it was fiercely grey and raining a lot.  Today, the grey lightened and the rain stayed away and it wasn't even terribly cold standing at the side of Tyee for an hour.  I had to put my mittens on and by the end my feet were noticeably cold, but it was not painful or anything.

Lots of people turned out with signs and lined both sides of Tyee up near McKenzie.    Somebody was doing an official count (at least, twice, people walked down the side of the road counting off), but i never saw them again to ask what the official decision was.  I'd have guessed around 200+.  There wasn't much in the way of committed slogan shouting, such as "Hell, no, we won't go."  Although I did hear some attempts at "People not Towers."

Alas, I saw no sign of any media taking notice of the event, which was largely the point of it, I thought.  I'm told by those who had driven through the border that the Tsawwassen residents were out in good form and that there were cameras and microphones over there, so they may make it onto the news or Youtube.  But I don't know exactly what ability the Canadians have to stop these towers from appearing in P.R.

Lots of the people coming through the border in cars had phones and Ipads and the like pointing out their open car windows.  I'll probably never get used to the idea that you can hold up an ipad and take a picture, but at least some documentation of the event exists somewhere.  If I hear where, I'll let you know.  Surely it would be worth a brief Youtube, although seeing people lined up holding signs is not exactly like watching cats or dogs do weird things.

One dog in attendance was wearing a tinfoil filter on his/her back.  Good to know she/he was prepared.  But a demonstrator's sign said the interference would be to stereos, phones, and TV's...no mention of dogs.

Update:  here's the story from the Vancouver Sun:
http://www.vancouversun.com/news/Tsawwassen+Point+Roberts+residents+continue+fight+radio+towers/9234438/story.html

2nd Update:  I'm jumping this up from the comments so that readers will be sure to get the following information:


Tsawwassenites and Canadians in general can help by either:

a. Contacting Minister James Moore who is in charge of Industry Canada to complain. The location of the towers is so close to the population center of Tsawwassen that it violates IC's guidelines for high-powered stations that cause blanketing interference. If IC files a formal complaint with the FCC it could result in their reconsidering their approval of the project.

b. Donate to the campaign. Go to http://notowers.webs.com/
and follow the donate link. Fighting isn't cheap. We need legal advice and counsel in our case with the FCC, experts in electrical engineering and surveying and local lawyers with knowledge of Whatcom county land-use and zoning codes.

Arthur (S. Reber), One of the Coalition Against the Towers

Posted by judy ross at 6:56 PM 6 comments: Links to this post