They've gone back down, at least at First Propane, to below $3/gallon, which is the point we're told when propane would be cheaper than electricity for heating.  So they came today and filled our tank which was getting close to empty (we use it for the cooktop, in any case).  And now the stove is back on, which is nice because the house is more evenly warm with it than it is with electric heaters here and there...

Almost April.  And still looking like late winter to me.  That is, late winter with forsythia! 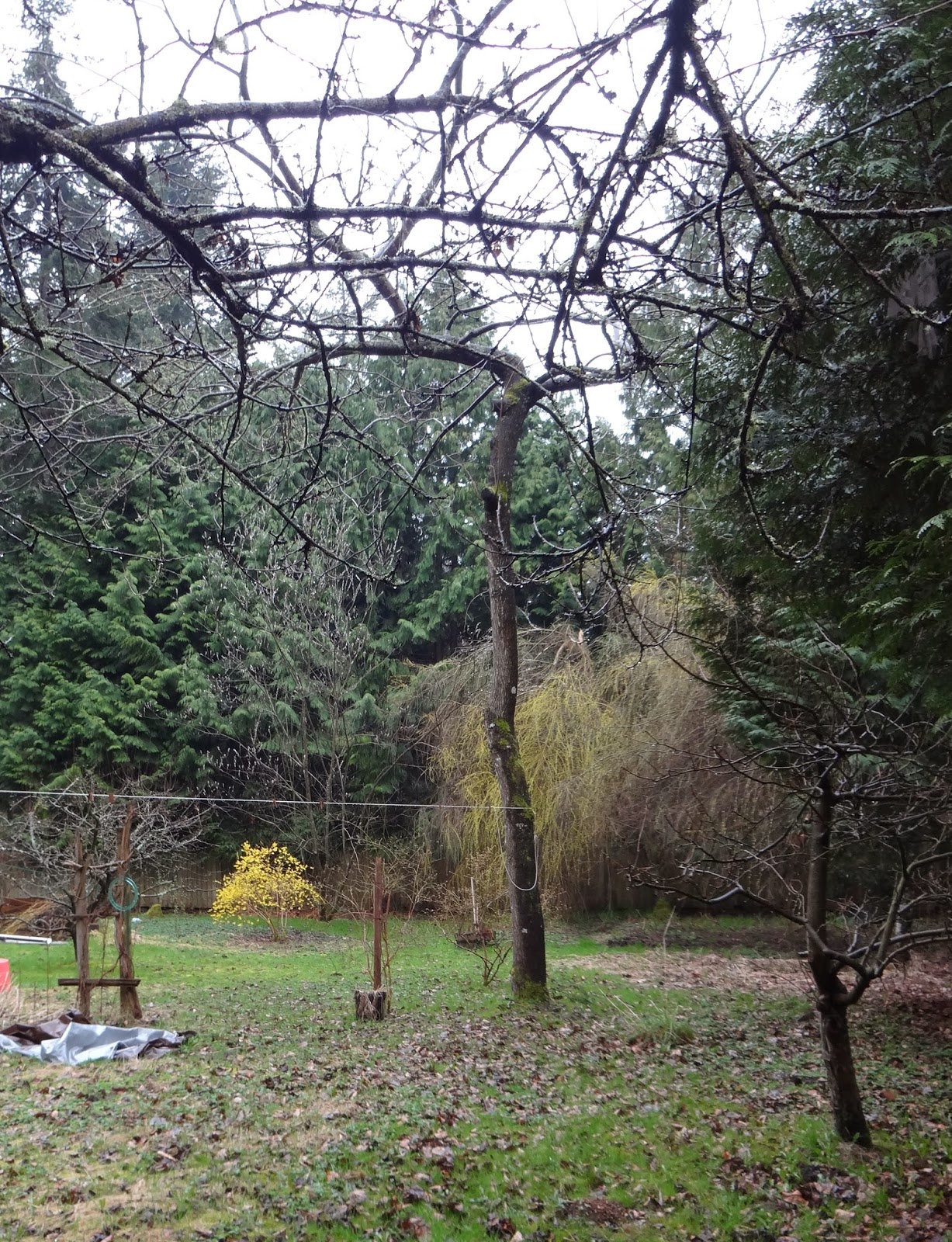 Here is some news that people will respond to differently, I suppose.  Those who say, 'the law is the law,' and those who say, 'really, that's all they've got to do with their work hours?"

however you respond, worth knowing, though.  I'm with the latter group, but in either case, the conflict between the feds and the state laws on this issue needs to be resolved so it doesn't drive people crazy.  The first thing, from my perspective, now that medical marijuana is widely legal and Washington and Colorado have de-criminalized casual use by adults, would be to get it offI the Schedule 1 list of prohibited substances.  That marijuana is on that list and that alcohol isn't makes no sense...It's just a historical anomaly.
Posted by judy ross at 4:32 PM 1 comment:

Coming Out of Winter?

But now there are things happening all of a sudden.  Last Friday, there was a reception for a new painting exhibit at the Community Center.  Last Saturday, I went to the presentation on "Burning Man" in Nevada, and then there was a chili cook-off later in the afternoon.  Sunday, Heidi and Tor were shearing the pygmy goats.  Tonight the Park and Recreation District elected/appointed a new Commissioner to replace Bev Griffiths, who has left the Point for Hawaii, I believe.  And we welcome newly commissioned Stephen Falk to the P&R Board.  Tomorrow night, PREP is doing a special presentation on what we should know about what to do should a disaster occur (that snow storm 10 days ago was about as much disaster as I'm probably up for).  And also on tomorrow night, the Community Advisory Committee is having people from Bellingham come up to explain to us why the CAC is now also going to fill the function of the Character Plan Committee.

Wednesday, the Fire District does its monthly video show.  Once again the announcement of the meeting did not include the agenda.  I'm a regular whiner on this topic because, since the public is allowed to speak ONLY at the very beginning of the meeting, we can't say much of relevance if we have no advance information as to what is going to be discussed.  Occasionally, they get an agenda together with the meeting announcement and then I am always carefully
asked if I am satisfied.  And yes, I am, but not when it's not included in the announcement.  Don't ask the question: you know the answer.  (Update: An anonymouse commenter sends us this news: "OLYMPIA — A bill expanding the Open Public Meetings Act just needs a signature from the governor to become law.

East Wenatchee Republican Brad Hawkins’ bill would require public agencies to post their meeting agendas online 24 hours ahead of time. It passed the senate last week with a vote of 41 to 6 after clearing the house last month. The measure was delivered to Gov. Jay Inslee this week.")

And the daffs and crocuses are blooming, the forsythia beginning to open to little yellow pots of pure sun.  The reappearance of daylight savings startles us both morning and night and causes us to find young children to reset our digital watches.  Wake Up, it is all saying.  Time to start paying attention again!

Canadians Come to Visit Us Here in Point Roberts

Lots of Canadians come down here for ten or fifteen minute trips to pick up packages, to get some gas, some butter and cheese, whatever.  They save money.  I understand that.  We do get a penny for each gallon of gas they buy, but we can't use it to do anything but build roads and we don't need any more roads here, really.

The crowds at the border are an inconvenience for residents here, but the Canadian visitors are mostly a nice sort.  They often provide support for the new library fundraising, they make the grocery store a financially viable operation.  But some of them, sometimes are--I don't quite get it because they are generally so pleasant and cooperative--a real pain in the neck.

Today, we were driving along the road a few blocks from our house when we noticed a couple of mailing boxes lying, soggy, on the shoulder of the road.  Not all that rare: people buy stuff and then throw the packaging away so that they don't have to pay any sales tax when returning to Canada or so that they don't have to throw the boxes away at their own house.  We stopped, picked up the boxes, and put them in the car to throw away at our house.

The boxes had, as in such cases is almost always true, no labels.  The trash droppers feel guilty enough about what they're about to do that they don't want us to know who is doing it.  Inside the boxes were plastic bags and, surprisingly, both a black jacket missing several buttons, and a packing slip.  I'm sure they didn't mean to leave the packing slip there, but they did.

So, DORSA GHADIRINIA, who lives in West Vancouver (street address upon request), I hope you are enjoying your new 3/4 sleeve black cardigan and your "Yosi Samra Chain T-strap Foldable, midnight/gold serpent, 9 m" shoes, I guess.   [ update:  my granddaughter sends me the photo of the shoes from Nordstrom's, but they are not, alas, foldable, she notes.]  And I'm not sure what you want me to do about your old black jacket with the military decorations and the missing buttons, but maybe I'll just be mailing it all back to you.  And may I fervently urge you, in the future, to avoid Point Roberts?
Posted by judy ross at 6:30 PM 1 comment: