This week, the International Marketplace had fresh spinach in a bunch (not in a sealed plastic bag).  I've lived here 20 years and I don't remember ever seeing fresh, bunch spinach for sale there.  I thought maybe it didn't exist except in home gardens and plastic bags any more.  And now, here it is.  Another reason to believe that hope should spring eternal.

The end of May and exceeding summerish.  Our rhododendrons are growing AND blooming furiously.  The one outside the fence which gets almost no care, steady exhaust fumes,  and only such water as nature provides, is now almost 10-12 feet tall and covered with bright pink blossoms.  I have lilies covered with buds whose stalks are taller than I am.  Some spring! 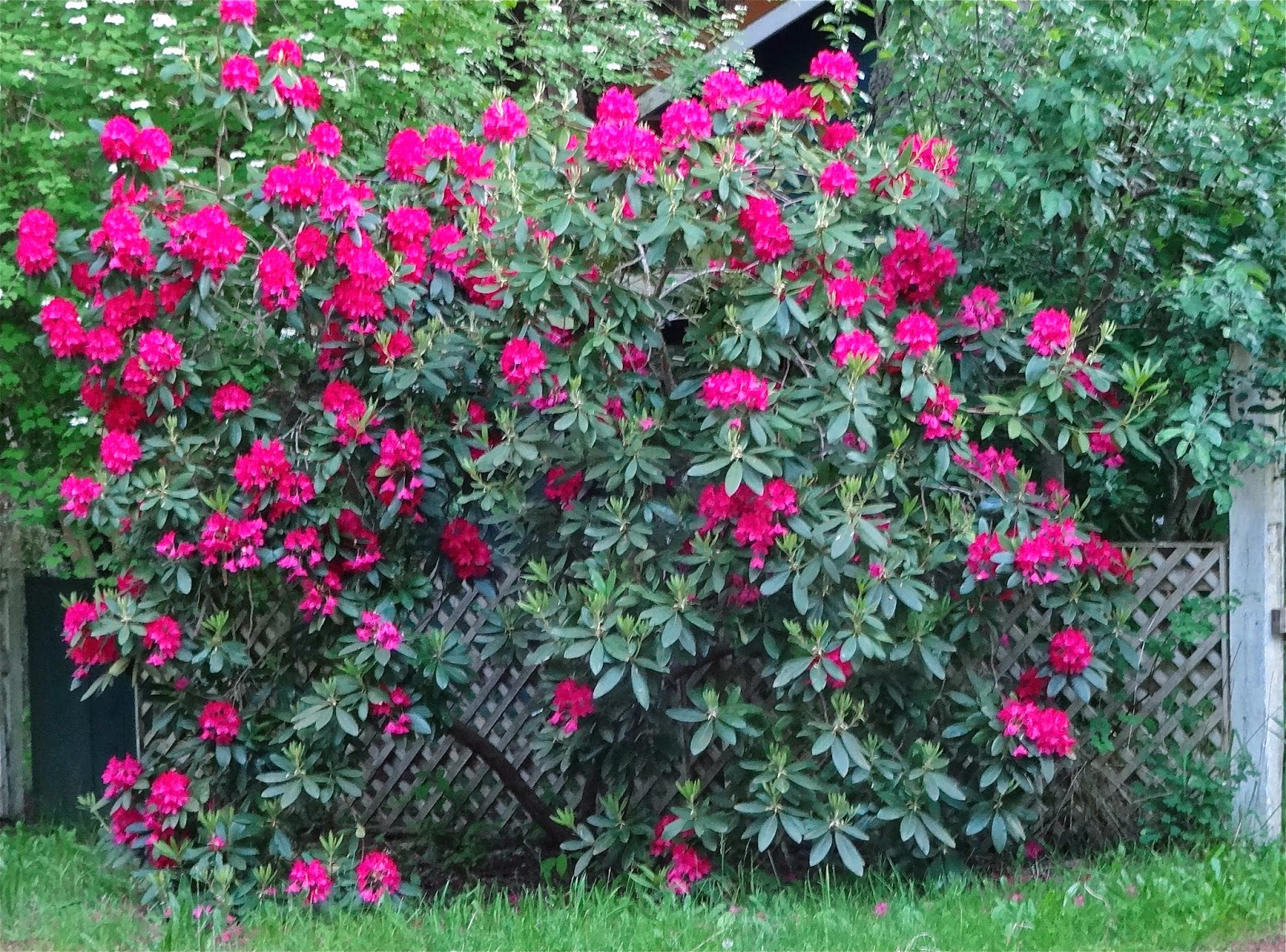 A funny thing happened earlier this month.  I was at the Park and Rec Board monthly meeting where they were discussing a current problem.  Puget Sound Energy needed to have an enclosure with a container where they could store equipment they needed to have readily available in case of power outages.  (We need them to have that, certainly.)  They build such an enclosure and provided such a container on land that belongs to Park and Rec.  After they built it, they agreed to plant some trees to do some screening of said enclosure.

Surely the simplest solution was for the fire district to allow a hose to be attached to its hose bib and for the water to just water the trees.  But, somehow, this got translated into Park and Rec's trees and the Fire District's water bill.  But all of it is for us.  If we'd had an election, I'm guessing everybody would have voted to have the Fire District do that and skip the special meter installation, which may cost more than water does.  But, instead we get a complex solution.  Which is the way we live now, I guess.

Apparently there is some confusion about public access to the Maple Beach Park, which is, I believe, owned by the Maple Beach Owners' Association.  This is where the new Little Library has been erected.  The Little Library is owned and operated by the Friends of the Point Roberts Library ( that's the group that is generally devoted to helping the library provide additional services as well as devoted to raising funds for a new library: anyone can join, and I urge you to do so if you care about the community's having a thriving library).  And the Little Library is there for the use of anyone who comes by and wants to read one of the books in the library.  You're Welcome, of course!  And enjoy!
Posted by judy ross at 7:51 PM No comments:

I am not sure that this constitutes a big change in P.R., not least because it's the second time it's happened in about the last 10 years, but it is the case that Sterling Bank is now Umpqua Bank (a name that reminds us that we are in Indian Country).  In that connection, I am offered (and now offer to you) a group of youtube videos that were made to introduce us to Sterling Bank back when it took over Key Bank.  They're an odd lot and seem only recently to have been posted to Youtube, perhaps by the advertising company to display their work.

They come to me by way of a new Point Roberts resident, newly retired, who has time (as one does at the beginning of retirement) to do things like roam around on the internet to see where Point Roberts is displayed.  Here's the link to the Sterling commercial about the Fire Department back in the days when, it would appear though probably not correctly, that we had only 4 volunteer firemen as opposed to our current 50 or so. (You can get to the other 5 videos by clicking on the ad agency's name on the fire dept. video link.)

Thanks for turning these up, Bennett, and welcome to you and your wife to full-time life in Point Roberts.
Posted by judy ross at 10:18 PM No comments:

Coming out from under in what looks sincerely like the spring.  Well, It's the middle of May, so I should hope so.  And there's various newses from Point Roberts:

1.  The International Marketplace is driving us all crazy by moving everything around so now we have to ask somebody where to find most of the things we were planning to buy.  I imagine it's good for store morale to do this kind of thing every so often, but old customers may be less enthusiastic.  I like knowing where things are a lot more than I like asking where things are, although at the moment at least there's somebody to ask in pretty much every aisle since they are the ones doing the moving.

2.  The International Marketplace is pleasing all of us residents with its new commitment to produce that looks very much like something that a shopper would be interested in buying and eating.  It's an amazing difference.  I remember a time a few years back when almost a quarter of the back section had nothing but carrots in a variety of package sizes.  Cardones?  Not only do they have them but they explain what you are to do with them.  Great work Dean and Team!

3.  The Cafe Cappana has opened under new management and Linda and Ron Hughes are doing a terrific job of bringing us a much spruced up environment and very nice food.  We had lunch there yesterday (and your entitled to have breakfast all day) and were more than pleased with the quality of the food.  And it's always good to see the Hughes family members, even when they are serving you your lunch.  Go and try it out.  The only downside (for us, but probably not for them) is that they close around 3, I think.  And the baked goods sell out early in the day.  Good luck on this new venture, Ron and Linda, Lake and Veronica!

4.  The Post Office disappoints by having lines almost all the time and rarely more than one open  window.  And they still cannot find a way to provide customers (or are we patrons?) with a scale.  If you have stamps (which you could buy at the grocery store, I believe) and a scale, you could sometimes avoid those lines.  Why they want us being irritated in those lines is a mystery to me.

Otherwise, welcome to spring in Point Roberts!
Posted by judy ross at 5:22 PM No comments: