Our World Has Been Very White

Three days of snow, a lot of snow, made for much inconvenience.  Roads covered, trees and bushes and plants covered, driveways blocked, etc.  And after awhile, it all turned into power outtages everywhere and people scrambling for alternatives.  I didn't leave the house for those three days and didn't have power for two of them, so don't have much first-hand information about how people were coping.

We shifted from electric to propane heat, cooked on the propane cooktop, turned on the oil and propane lamps, and otherwise did without whatever electricity normally provides.  After the first 6 hours, our walk-around telephones (we don't have a land-line in this house, and apparently these phones were able to get a connection to the tiny guest house which does have a land-line) took to working but we didn't discover that for another 8 hours, and our power didn't get turned back on for a good while longer

A 20-foot fir branch fell, with great and scarey noise, onto our roof and thence onto our car, denting the roof (which is metal), and the hood of the car, while pretty much destroying the front windshield.  We send up a cheer for shatter-proof glass.  And we sat about listening to the great snow gatherings in the trees above us eventually drop and explode like bombs heard at some distance.  The cat was not sure that it was at a distance and mostly retreated to the closet and still, 2 days later, has a very worried expression on her face.

This was a big snow storm, although maybe we've had one or two as big over the past 22 years.  But nothing I'd be interested in repeating regularly.

Below, the snow before it began falling from the trees.  Many branches broke from its weight.  Very wet snow. 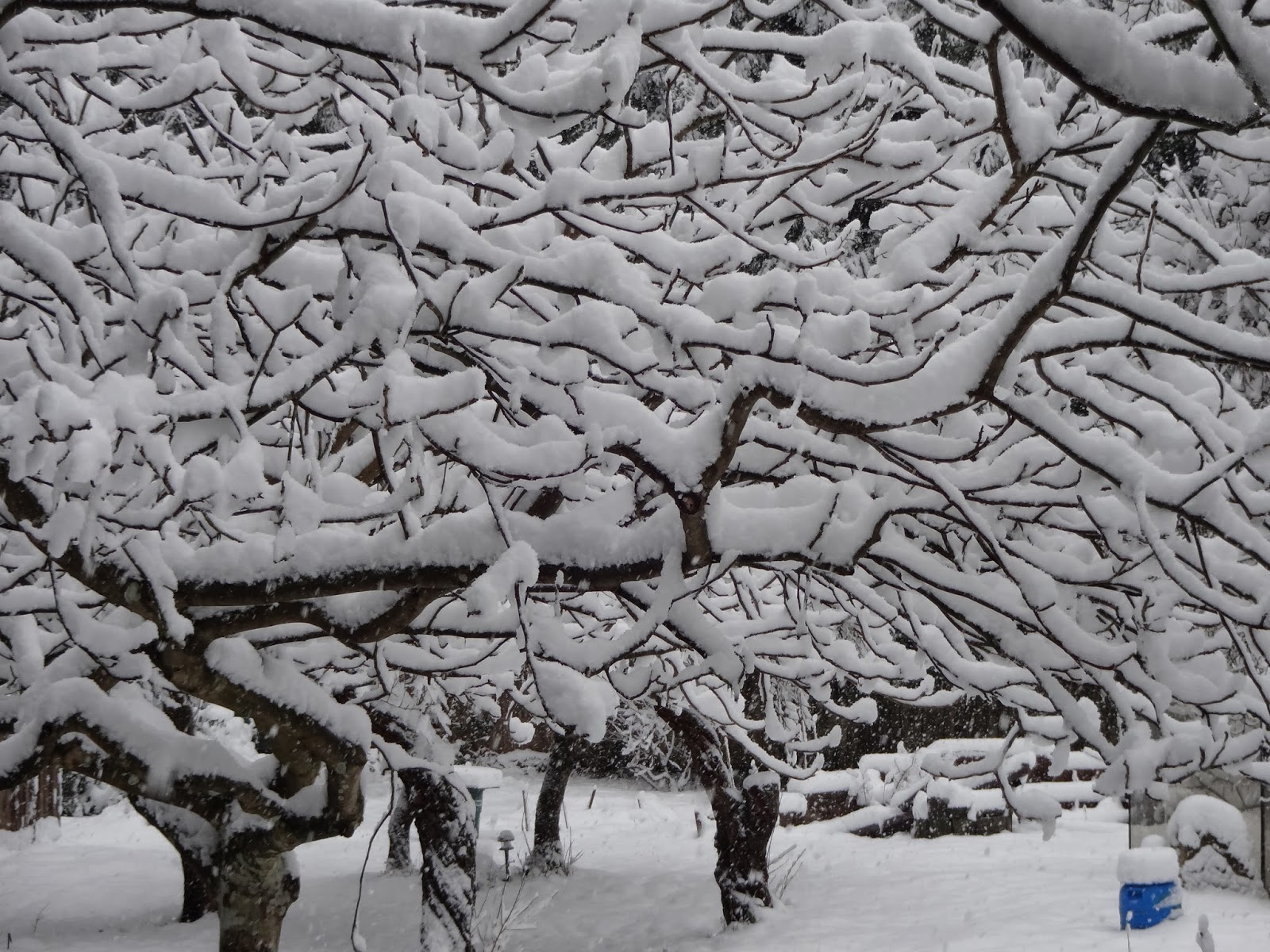 Posted by judy ross at 12:02 PM No comments: Links to this post

A Better Version Than Mine

My older daughter, a blog reader from New Mexico, comments that the previous post sounds a lot like 'spam poetry' (an internet art).  And then proceeds eloquently to turn it into spam poetry:

The Parking Lot Has Cracks

Walking disabilities can't see at night
A discussion why you might change
after years of being.

An offer to escort the disabled from their cars to the building
Describe four possibilities, including itself
No decision, there were only two.

Mr. Meursing thinks Mr Wilmot thinks
Something about possible other benefits,
Might not be the one you want.

To ameliorate the problem
3rd meeting in a row
but nothing about more.

You can watch it all for yourself
While you decide the insurer
Should be an adequate response.
Posted by judy ross at 7:53 AM No comments: Links to this post

If It's Wednesday, It's the Fire District

There's a discussion of why you might change insurers after years of being with one insurer.  Clear about how they are planning to look for other insurers (have one insurer describe four possibilities, including itself), but not clear about when/why you decide that the insurer you've had might not be the one you want.  Something about possible other benefits, but nothing about more costs for more benefits.

And some more discussion (3rd meeting in a row, I think) of the fact that the parking lot surface has large cracks that people with walking disabilities can't see at night because the District painted the surface black.  Mr. Wilmot thinks there could be something done to ameliorate the problem; Mr. Meursing thinks an offer to escort the disabled from their cars to the building should be an adequate response to the American with Disabilities Act.  No decision, since there were only the two of them at the meeting.  Perhaps Mr. Riffle had yet a third view.

Soon it will be on video and you can watch it all for yourself.
Posted by judy ross at 10:07 PM 1 comment: Links to this post

Cold for days and days, it seems.  Not much but cold seems to happen when it is cold.  But this is the second week of the month when meetings are abundant, so one can go to meetings.  Ideally, in warm buildings, but not always the case.

Last night, I went to hear what the Park and Rec Board was doing to repair the Community Center.  Waiting for the seismic engineers' report on the seismic inspection, is mainly what they are doing.  And, as a result of the meeting and an excellent suggestion by Ron Hughes, considering whether it needs to hire a project manager to coordinate the various aspects of the Major Repair Program.  The initial idea was for one of the Commissioners (none of whom it would appear was particularly skilled or had relevant experience in this area) to complete the task for free.  One might think that having appropriately responsible coordination and oversight for a $250,000 project would be essential and that it would necessitate hiring someone to do it.  But not necessarily, apparently.  The Commissioners are thinking about it at this point, anyway, thanks to Mr. Hughes.

Tonight, we could choose between the Propane Meeting and the Community Advisory Committee Meeting.  I chose the former, because I kind of knew that the news at the latter would be minimal.  The propane meeting, by contrast, was a brand new topic and seemed to have considerable possibility for just being interesting.

Until I read about the meeting, I didn't even know there was a problem about propane.  We use it to heat the house and we like it a lot.  I Googled a bit and found that there has been a big surge in propane prices here and there throughout the country, but not everywhere in the country.  Some places it was in the range of $2/gallon, and in others it was $4-$6/gallon.  The midwest and the east coast were especially being hit with sudden spikes in price, but few stories about such spikes on the west coast.

So I went to the meeting with the knowledge that it wasn't just a local problem.  At the meeting, the impulse was largely to treat it as a local problem.  One of the two local suppliers was charging considerably more than the other.  Unfortunately, unless you own your own propane tank, you can't just switch from one supplier to another.  (How people expect market theory to work when there is a captive audience and no information and no effective form of competition is a mystery to me, but doubtless there are market supporters who would say well, we shouldn't have chosen to live in such an awkward location.)

Couple of things by way of information: According to Puget Sound Energy, when propane gets to be over $3/gallon, electricity is cheaper to use as heat.  (Electricity prices are quite stable.)  According to George Iddon, if you have a rented tank, your propane supplier charges an extra 10-20 cents for each gallon of propane you buy.  (Thus, he said, when you ask them what their price is for propane, they need to know first whether you own your own tank.)

Some of the dozen or so folks attending wanted to write a community letter to the more expensive of our propane suppliers to indicate their unhappiness at the pricing policy.  Again, Mr. Iddon reported that he had checked propane prices in Whatcom County, and that prices were generally in line with the cheaper of our two suppliers.

The U.S. Senate is talking about holding hearings on the problem nationwide and urging the FTC to look into the price spikes to determine whether there are market manipulations going on (as with the Enron scandal in electricity pricing some years ago).  So we could be contacting our U.S. Senators, as well.  Or, we could just watch the Olympics, I guess.  Or do some extra exercise to keep warm or, in honor of Jimmy Carter, put on another sweater..

Update: the national average price for propane this week is $3.75/gallon.
Posted by judy ross at 8:57 PM No comments: Links to this post