Strange Doings at the Fire District

Now, you are scarcely surprised by that title.  Nor am I.  But last night the Commissioners were faced by a conundrum.  The Fire Chief has a 3-year contract which stipulates that he will be paid $3,400 a month for a half-time 80-hour/month job as Fire Chief here at Point Roberts.  That would translate into a yearly paycheck of almost $41,000.  The Fire Chief says that full-time Chiefs in comparable districts are paid $65,000 and $85,000.  So, $41,000 for half-time is certainly in the ball park.

So where's the problem that the Commissioners need to solve?  Well, the problem is that the Chief actually works more than the 80 hours/month (150 hours, e.g., during the last month).   So, if you want to revise his contract to recognize the wonderful job he is doing (as judged in private by the Commissioners), you could change the Fire Chief's job from an 80 hours/month job to a 150 hours/month job (say a 3/4 time rather than a half-time position) and pay him accordingly at the same hourly rate.

But, for unknown reasons (Meursing says it would be dangerous to make it a 3/4 time position because "soon there would be a full-time Chief"), that is not the route they want to take.  Instead, they want to boost the Chief's half-time job to a pay rate of $53,000 per year instead of $41,000 per year.

By the end of the meeting, the Chief had announced he would accept a contract revision only if it made his half-time job now pay $50,000/year (and then promised to work many extra, unpaid hours to demonstrate his devotion to the community).  And the Commissioners voted to accept his offer.  So, now little Point Roberts with its very large (half million/year) Fire District budget is sporting perhaps the highest Fire Chief's pay rate for small, volunteer fire departments in the vicinity, or maybe in the state.  What a generous bunch we are!

The underlying part of all this kabuki is that the Point Roberts Fire Chief also has a full-time job as a fireman/paramedic at the Ferndale Fire Department.  So, he's working, in hours, two full-time jobs. He does not charge us, he says, for the hours he spends sleeping on the Point.  If he did, it would apparently be more than two full-time jobs.  But we're not going to pay him for the hours he works: just for the first 80 at the new, higher rate.  We're going to accept his extra hours as a charitable act, I guess.  I simply know no good business or management practice that would think this was a good idea.  And I would wonder whether the County endorses its public employees holding multiple full-time or near full-time positions.
Posted by judy ross at 7:59 AM 2 comments:

The Puppets Were Here! 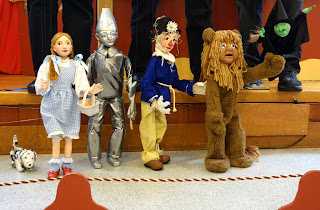 Yesterday afternoon, the local library sponsored a puppet show based on the characters from The Wizard of Oz, by "Welcome Marionettes."    It was a classic marionette performance, which is not easy to see nowadays, even if you live in a much bigger place than Point Roberts.  I guess because of the (well-deserved) popularity of "Sesame Street", rod-puppets are much more likely to be on view, so this was an especially wonderful treat for anyone who is a fan of this very ancient, truly classical puppet format.

The troupe, which is based near Deming, Washington, in a place called "Happy Valley" (would you have puppets based anywhere else?), is small: three puppeteers and one musician, who is also one of the three puppeteers.  Nevertheless, they travel with a large theater (filled up the stage entirely at the Community Center) that enables marionette manipulators to create one of the big magic acts of classic marionettes: as you watch the marionettes, the confines of the stage make them gradually appear to take on life-size so that when you eventually see them next to the human puppeteers, you are astonished to see how small they are.  The enclosed staged does much of the work for this and the human eye does the rest.  Throughout the performance, I was intensely aware of this size sensation.

They sang and they danced and they were much frightened by the flying witch and by the end of the performance, they were all--Dorothy in her glittering red slippers, a very bouncy Scarecrow, a glittering Tinman, a frenetically cowardly Cowardly Lion, and an adorably tiny Toto--safely and confidently on their way to see the Wizard.  And then we got to ask questions of the puppeteers, who not only manipulate the marionettes but actually make them as well.

If you missed it on Saturday, I'm very sorry that you were otherwise busy.  But you can wait hopefully: maybe they'll be back next year with "Alice in Wonderland."  Lucky us!  We live in Point Roberts where the puppets come to us.
Posted by judy ross at 9:11 AM No comments:

More on the Radio Towers

Emails by the dozens are zipping round the Point on this topic.  Most are pretty negative about the proposal and I can understand that.  There is generally a feeling that this is something that is being dumped on the Point and that the project has absolutely no benefit to Point Roberts: no jobs and no improved service of any sort, but an aesthetic downside and perhaps some electronic interference to nearby houses.

Indeed, one of the reasons that it is being moved (potentially) from Ferndale to Point Roberts is that the area where the towers were located in Ferndale was experiencing more housing development.   Here, there are relatively few homes within 1,000 feet of the proposed site.  Also, those people here were all notified of the proposal around August 1, but it didn't rise to general information until last Thursday when the E-edition of the APB came out.  The suddenness of the news (and the lateness, given that the end of the public comment period is August 16, 4 days from now) also contributes to the general feeling that we are being treated shabbily by the County.

About all that can be done right now by individuals is to write to the Whatcom County Planning Department immediately if you have concerns.  Address your emails to sbosman@whatcomcounty.us and include the following information on the subject line: CUP2013-00004 and SEP2013-00032, KRPI AM Radio Transmitter Site.  Also include your name and physical address in Point Roberts.

The Planning Dept. has already indicated that it is likely to approve this application, but there will be a public hearing, probably in early October according to Ms. Bosman, and public comments will be a part of that hearing.  Various groups in P.R. have requested an extension for the comment period, but the Planning Department says it will not be extended.  Community displeasure could be dispositive for the Hearing Examiner.

Include the follow
Posted by judy ross at 9:15 PM No comments:

More Trouble in Paradise? Will It Never End?

The towers are intended to provide access to Richmond's East Asian community for a radio station in Lynden Ferndale and the implication is that it is cheaper to do this (ie, the towers and maybe the station itself) in the U.S. rather than in Canada/B.C.  There appears to be provisional approval from Whatcom County.  You can read about it in the APB's E-edition this week.  Plus comments: at this point, there are eleven of them and they're all in opposition.

Point Roberts residents often speak in favor of Point Roberts being different in some way or another (usually this is in regard to more economic development, more entertainment, or more pizza delivery, e.g.), but they are somewhat less frequently in favor of things that are on offer, and especially radio towers, it would appear. There is a deadline for public response (August 16); details for how to make such a response in the APB article linked above.

Update, 8/11:  Someone has started a blog on this topic, and I cannot speak to its accuracy, one way or the other, but you can read it here:  http://prtowers.blogspot.com/
Posted by judy ross at 1:23 PM No comments: