Following up on Wraps

The wrapped cars and boats and cottages have increased as the days go by, the leaves fall, and the people disappear.  They look well against the near steady gray skies as they exit through the border.  Bye!  See you in April.

Other kinds of wrapping are also going on.  Yesterday, Zoe the cat and I watched, from indoors through the window, a lovely little brown-gray squirrel working on her wrapping.  (She seems to be the only one of our last year's big assortment of squirrels--6 of them--who has survived the summer or who has not moved away.  We call her Pearl, although we don't know what her real name is.)

She first appeared outside the window with an apple, held by its stem in her teeth.  There are apples all over the place, so it doesn't surprise me to see any animal wandering through fooling with apples.  In fact, they should eat more of them.  But Pearl was not eating this apple.  She was barely able to carry it as it was about twice the size of her head (although squirrels do have quite small heads, but still...) 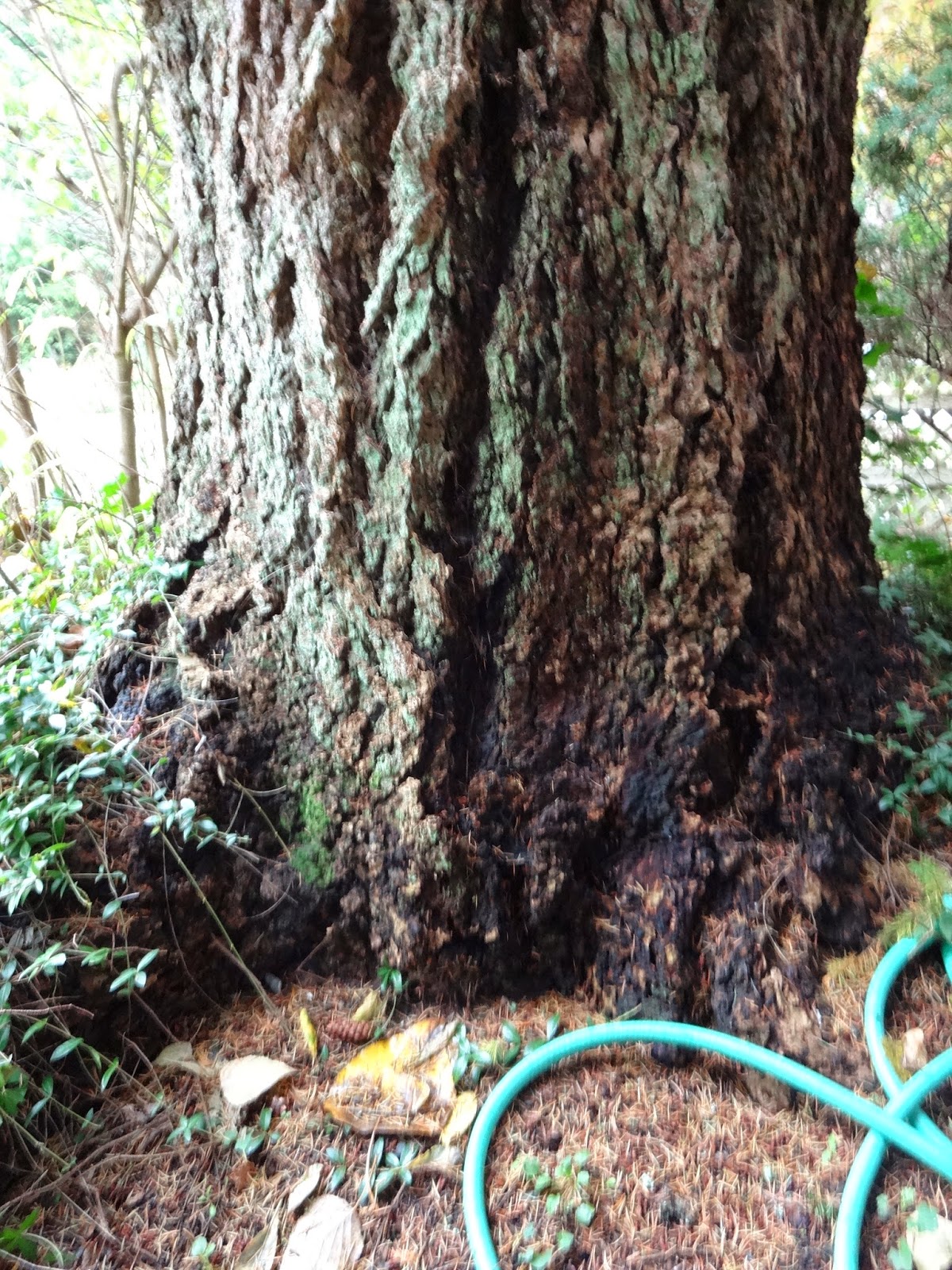 She dropped the apple under a giant fir tree outside our front door (surely first growth...15-20 feet in circumference) and started digging with her excellent fingers.  Watching her dig was really impressive: so fast, so sure, so focused.  Hard to believe she didn't actually have fingers, although for all I know it might be easier to dig with paws than with hands/fingers.  She dug the neat little hole, exactly the size of the apple and then picked it up and dropped it in the hole and then neatly covered it.  When she was finished, there was no sign of digging, no sign of apple.  And she moved off.

Now, I've seen squirrels bury nuts before because we leave our English walnut tree product to the squirrels and they bury them all.  But I've never seen one bury an apple.  I've never seen any animal bury an apple.  They just eat them or they ignore them, but they don't bury them.  And I would think that the reason they don't is because they intuitively know that the apple is not going to last long if it's buried.  But maybe I'm wrong.  Maybe burying an apple is like putting it in a root cellar, keeping it cool; although, just sitting on the top of the ground it would stay cool.  I don't know.

I googled "squirrel burying apples" and got a lot of hits for people talking about squirrels, several of whom casually comment about squirrels burying nuts and apples, but nobody addressed the issue of the burial of apples as an effective storage device.  Google rarely fails, even if it leads me to something that is not true, but it almost always leads me to something.  Here, not so much.  So, I'm left watching each day the spot where the apple is buried to see if she comes back soon for it, before it becomes a decayed apple.

Although, considering how neatly she buried it, she could unbury it just as neatly and I would never know unless I happened to see the action.  So perhaps this will just remain a mystery of nature.  One more item in a large book.

Update: my excellent-gardener daughter reports to me that the squirrel is smarter than me (not too surprising, really, when it deals with squirrel work):  http://chestofbooks.com/gardening-horticulture/Gardener-Monthly-V23/Keeping-Apples.html#.VFKis_TF9U5

You might think that Christo (http://en.wikipedia.org/wiki/Christo_and_Jeanne-Claude) and Jeanne Claude had taken up residence in Point Roberts recently what with the plethora of wrapped cars and other vehicles, boats and the like.  From my window, I can see a camouflaged vehicle on a trailer, high in the air, as well as a grey-wrapped SUV, and a boat almost submerged in its wrapping.

But it's not art, it's just October.  In the fall, our semi-permanent residents abandon us for their real homes (we are their ever-nostalgic 'summer places'), but we are also, those of us who stay all year regardless, abandoned by many of our permanent residents.  We are only 1300 at best and then maybe 1/4-1/2 of them wrap their vehicles in tarps or carcoats and go away to their southern homes.

At the moment, despite its being October, the leaves are still green on the trees and still firmly attached to the trees.  Maybe the leaves and the snowbirds could stay this winter.  Maybe Point Roberts will turn to a Mediterranean climate.  That would be a treat....and then Christo and Jeanne-Claude might have reason to come and wrap us up, or at least wrap up the dreaded towers which are increasingly looking to be their own happening.  Let us, perhaps, as an art project, consider wrapping the towers in camouflage.  Just random thoughts on a non-fall-like day...
Posted by judy ross at 11:53 AM No comments: Links to this post