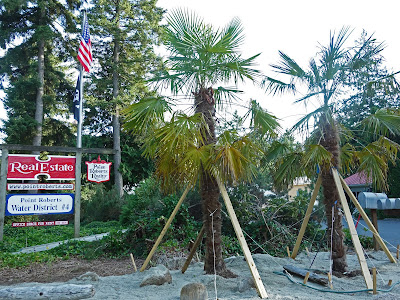 Am I surprised?  Preparation for global warming?  Waiting for the tsunami?  A Robinson Crusoe film background?
Posted by judy ross at 1:51 PM No comments:

BUT, his reply did prompt me to think more carefully about exactly WHY I don't think it's such a hot idea.  And at the bottom of that train of thought, I found the Character Plan.  I think the idea, within the character plan, that making all the businesses look like 19th Century fishing villages (or some such thing) would be good for Point Roberts because it would make it more like the scenic little towns that dot the west coast: think Carmel, California.  And I'm guessing that the scenic little roundabout also arises in that fantasy: that in some way, Point Roberts can be made into a lovely little tourist destination.

I suppose it could, but it would take a massive amount of money, a ton of buy-in, and a master plan of impressive proportion.  We've got trees and ocean but other than that, what do you take your visitors to see in Point Roberts?  Is the orange palm tree still at the marina restaurant?  I take my visitors to see the quilts at the church and at the History Room in the Community Center, but random guests may not be as interested in quilts as mine tend to be.  The lines at the gas stations, the package stores, and the post office?  The full parking lot at the International Market?  Those are the places that most visitors to the Point go: and they don't care whether the buildings or the streets are cute as long as they can get through the border to do their business and safely transmit their purchases back to Canada.

So if it were going to be a tourist town in the Carmel sense, it would need some more public attractions:  Lily Point is a great starting point, but the cost of buying the land and developing it has been well over $4 million.  Real tourists largely are looking for something to do and only secondarily for something to buy.  I just don't know what they'll do with a roundabout.

Of course, maybe I'm wrong that the roundabout proposal has nothing to do with a cute little tourist destination of the future.  Maybe it's just a fascination with going in circles...

Round Here, Round Where?

It is I believe received wisdom that unhappy is the land on which oil is found.  Oh, well, there's all that economic development/devastation and all that money of course.  But apparently, no matter where you go, you find oil discovery comes with deteriorating social conditions and corruption on a large scale.  Think Saudi Arabia, Texas, probably North Dakota and Alberta nowadays.  Oil just doesn't seem to bring out the better side of humans.

It's unlikely that oil will be found in Point Roberts, so we won't have that to add to our other problems.  But we do have the peripheral problem of the money generated from oil via gasoline.  That is, we have the gas tax slush fund.  Well, not exactly a slush fund since I believe such funds are traditionally part of the corruption aspect.  But perhaps more like found money.  It's some kind of prize and it's OURS, and they (the holders of the slush fund) won't let us do whatever we want with it.  And so, we sit around and try to think about things they might  let us use it for.  It burns a hole in our pockets, I think, or at least in some of our pockets.

Personally, I want a chunk of it for a parklet in front of the new library and extending over to the Community Center.  It would constitute Road Beautification, which might pass muster.  But I've been given some discouragement with respect to that definition of what gas tax moneys can be used for: roads.

So, we can't, apparently, just pretend the money isn't there and we really don't need any more roads here.  It appears that people brood about this pot of gold (getting up to a million dollars now) and that leads them to think of things you could do to a road.  Currently, there is actually a proposal to build a roundabout at Benson and Tyee in order to deal with the dreadful traffic jams there.  Or with the people racing down Tyee who haven't been pulled over by our sheriffs who hide behind nearby buildings.

It has even been suggested that a roundabout would add beauty to that corner, although perhaps such beautification would render the idea unapplicable under the gas tax rules.  I cannot exactly pinpoint what makes me think such a proposal is so nuts.  First of all, it would take a lot more room than that corner currently has available.  Second, it would require massive education for local drivers and a lot of explanatory signage for visitors.  Third, there are a lot of bicycles down here in the summer, not to mention horses.  Do those work well in the roundabout excitement?   Nobody wants to get off for Teller, so it could just be In, Out on the Opposite Side, or a return to the border.  It's easy enough to turn left on Benson already.

But I see that there is a desire to spend that money.  I have an alternative vision.  I doubt if Canadians would be driving down to see our Roundabout, but what about a Viaduct or a Raised Bridge.  Would that not draw tourists?  Once you get it up in the air, it could be really big, 3, 4, 6 lanes.  One for Icelandic ponies exclusively.  Just think about it a little and the idea may grow on you.

In the meantime, the Community Advisory Committee which seems to be backing the roundabout proposal is meeting this coming Tuesday evening.  Go and see what they are thinking; suggest a viaduct/raised bridge.  The Chair, I believe, is opposed to the roundabout idea and he says (in the APB) the Voters Association is opposed to it.  But this new idea could be something awesome.  Maybe they'd like to spend the money on a skyway road!
Posted by judy ross at 7:09 PM No comments:

Crime Wave Abates or Something 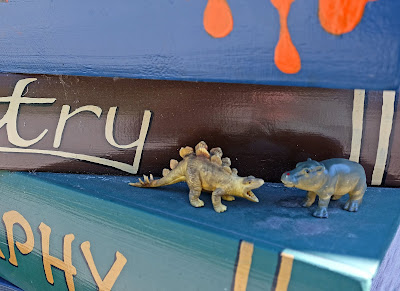 The hippopotamus is a new resident, but it's the same stegosaurus as used to live on the book sculpture, although now it's a new color.  Could be there's more than one of them around, I guess.  But what about the ruffled lizard?

And the smoke from the B.C. forest fires went back north yesterday.  And the 4th of July is over.  But still a lot of bike riders on the roads.  The second crop of lilies are beginning to bloom, the raspberries and strawberries are producing edible fruit, the horsetail (once again uneradicated) is going to seed.   Fewer raccoon sightings.  Summer...If we can just stay awake.
Posted by judy ross at 7:20 AM No comments: